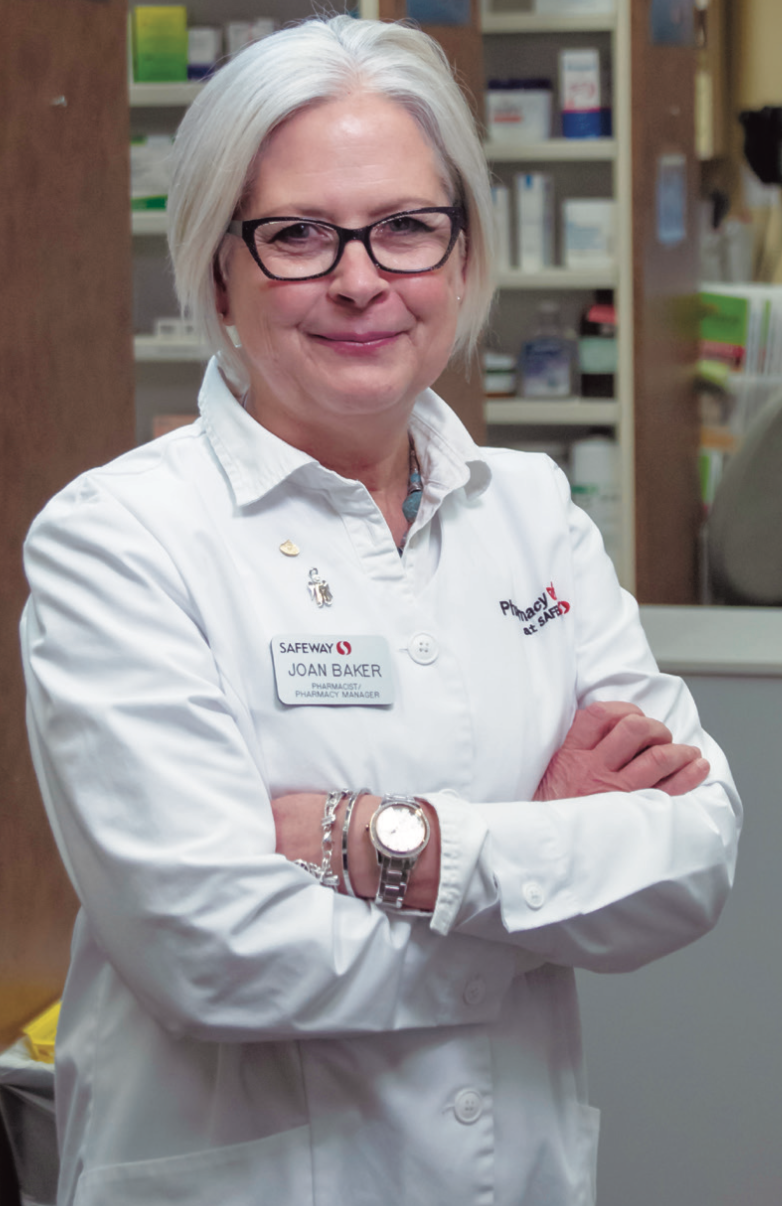 After earning her pharmacy degree from the University of British Columbia in 1981, pharmacy manager Joan Baker set out for her first job, in Powell River, figuring she’d gain some experience and move on. Things didn’t go exactly according to plan.

“I love Powell River,” Baker says. “I came here for a year and never left!”

Apart from its natural splendour, Baker credits Powell River’s “organic, artsy community” and emphasis on wellness as some of the main advantages of the intimate, coastal town.

Passionate about both pharmacy and her adopted home community, Baker has taken an active leadership role in promoting health and wellness for all individuals in Powell River, including as a current Board member of the Powell River Community Foundation, where she serves as Director of Communications for the non-profit organization.

Baker was instrumental in bringing the BC Renal Association into Powell River by securing a contract with the organization through Safeway, ensuring patients’ needs are being met in their own community. She has been an integral member of Powell River’s current innovative PR Wellness Project, in which various community and professional organizations, government agencies and individuals have collaborated to help improve the overall wellness of the town’s community since 2016. She was also an original Board member for the Powell River Harm Reduction and Needle Exchange program, which provides harm reduction supplies for safer injections, disposal of hazardous materials, as well as community education.

“Joan has been a leader in pharmacy, inside and outside of her dispensary for over 30 years,” says Stephanie Hahn, Sobeys manager and Baker’s supervisor. “She leads by example, teaches people and coaches patients to better health.”

When it comes to her work in the pharmacy, a professional motto of ‘one patient at a time’ has built up a loyal patient base. A fixture in her community, Baker is called upon for her knowledge and guidance on a daily basis – from patients who fret over her impending retirement, to mentees who have flourished under her tutelage, to physicians who call to ask for her input on a patient’s prescription.

“It’s all about building up a level of trust and communication,” she says. “One patient at a time, one med review at a time.”

From operating Powell River’s first pharmacy-owned computer in 1981 to opening one of Safeway’s very first pharmacies in B.C. in 1988, Baker has been at the forefront of the town’s development of pharmacy care over the past 35 years. She has pushed forward blister packing (which now makes up 40 per cent of her business), mental health care and methadone maintenance. She launched the town’s first in-pharmacy immunization program, which has led to a thriving injections program.

“I have always been an early adopter,” Baker says. “My motto is to embrace change. At one pharmacy conference, [BCPhA Lifetime Achievement Award winner] Marshall Moleschi said, ‘We need to walk into the grey area,’ and I took that to heart.”

Follow
BC Pharmacy Assoc.
@bc_pharmacy
BCPhA members: Want to serve your profession and advance the practice and economic sustainability of B.C. pharmacy? Nominations are being accepted for qualified members to stand for election. Three seats are open. Deadline for nomination Sept. 30. https://www.bcpharmacy.ca/news/call-nominations-2021-bc-pharmacy-association-board-directors-election
Reply Retweet Favorite September 9
BC Pharmacy Assoc.
@bc_pharmacy
RT @LindsayDixonFP5: BC Residents: How to register for your #BCVaccineCard #bcvaccinepassport #bcpoli #COVID19BC @bc_pharmacy Shout-out to @JansenWendy for the tip for those who have a BC service card as well! Now added into the video✅ @adriandix @jjhorgan @keithbaldrey @VanIslandHealth https://t.co/d3oAXtcQLc
Reply Retweet Favorite September 8
BC Pharmacy Assoc.
@bc_pharmacy
BCPhA Excellence in Pharmacy Awards are open! Your pharmacists have been on the frontlines of the COVID pandemic, managing opioid use disorders and helping patients affected by wildfires. Nominate a deserving pharmacist today. Deadline midnight Sept. 30.http://ow.ly/H5Mp50G5Ox4
Reply Retweet Favorite September 7