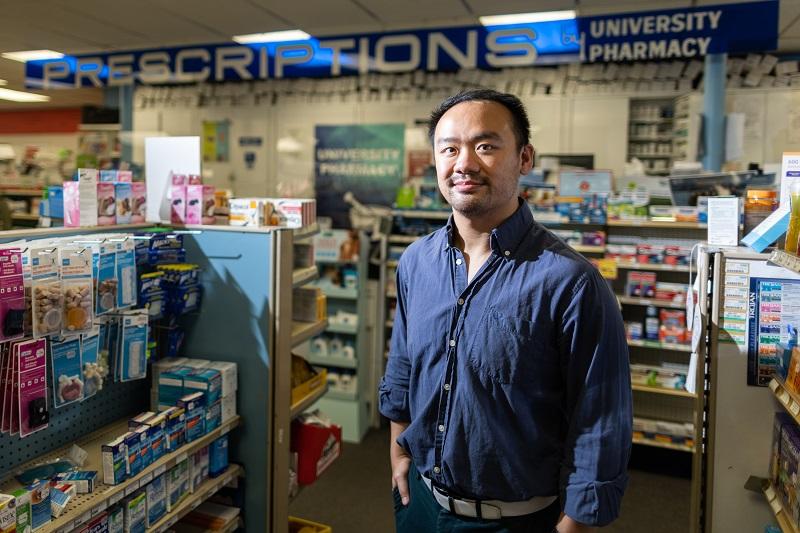 Keep an eye on the details, without forgetting the big picture. It’s the piece of advice that leaps into pharmacist Mario Linaksita’s mind when he thinks back to the lessons taught by his father.

Now in his early 30s, Linaksita has now taken over the family business, serving as owner and pharmacy manager of IDA University Pharmacy, located on the University of British Columbia campus grounds. The winner of the 2022 Murray Dykeman Mentorship Award is regularly a source of advice today, especially due to his proximity to the Faculty of Pharmaceutical Sciences, the students within, and the wealth of knowledge he is willing to share.

“It feels right to be here,” Linaksita said. “Students are constantly hearing new things that are coming down the pipeline… they’ll come here for business ideas for their business class, or if they want a little bit of real world experience. Sometimes they’re unsure about the applications of what they’re being taught in school and are looking for advice.”

Linaksita’s father, Christopher Linaksita, first purchased the pharmacy in the 1980s before Mario himself was born just a few years later in 1989. As an infant, the junior Linaksita would spend his days in a crib, at the back of the pharmacy.

“When I was still growing up, I would get stuck into the grind of schoolwork, of socialization, all that kind of stuff, my dad would always say, ‘Don’t forget. Whether it’s an activity, or sports, or schooling – what are you trying to get out of it?’” Linaksita recalled.

“I still have that as like a core value. Keeping an eye on the horizon.” 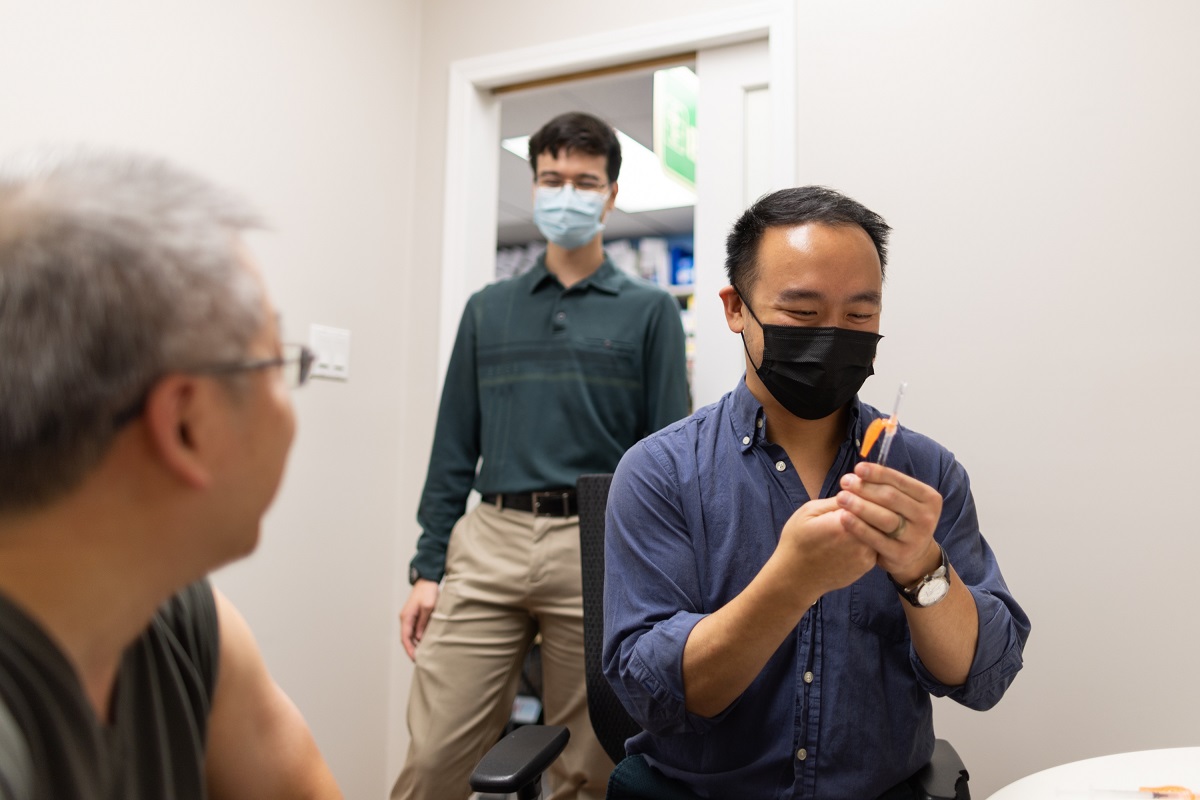 Today, Linaksita (right) defines mentorship as helping a mentee through their journey to become the person they will ultimately be.

Growing up, he would spend each day at the pharmacy, often helping out, and looking towards the campus grounds.

“Seeing him work, seeing how he interacted with people, that was definitely a signpost for where I should be headed,” Linaksita said. “I always thought I would attend the school (UBC). Pharmacy school was always a goal, and when I got into the pharmacy program, I realized that it had a lot of the same values that were instilled in me … that inevitably, my values mirrored what pharmacists valued as well.”

During his time as a student, he met another valued mentor, Mona Kwong, a clinical instructor at the Faculty of Pharmaceutical Sciences. She taught him to push the boundaries. To seek to expand the profession, and to change what has been established.

“At UBC, not that many instructors were focused on the scope and what’s next for pharmacy, the potential of pharmacy, and that’s what really struck me as different about Mona,” he said.

“There was a lot of doom and gloom at the time. It seemed like pharmacists were being pushed to the edge of their capability when it comes to time management but not to their professional capacity, which was quite concerning to me.”

That attitude, of pushing the scope and being able to see the potential and opportunities in pharmacy, was a relief to him. In the later years of pharmacy school, Linaksita would observe more mentorship styles during his practicums at different pharmacies, including time spent working at a hospital pharmacy, a pharmacy that works with care homes, a blister pack-only pharmacy, and other experiences.

In 2016, he returned back to University Pharmacy, taking over as pharmacy manager and owner from his father. It was a strange transition, he recalled, moving from the role of that as a family member – with no formal position at the pharmacy – to that of the leader. In many ways, Linaksita felt he had come home.

“It felt it was right,” he said. And these days, pharmacy students are being taught skills with the expectation that the pharmacists’ scope will continue to grow, and that the profession will evolve in the future. No more doom and gloom. At least, that’s what Linaksita sees in the pharmacy students who regularly serve at his pharmacy, or who are passing through, seeking advice.

When he meets a new mentee now, he prepares an exchange of expectations.

“I give them my expectations, the ground rules, per se. Then we bring it back to their expectations, what do they need from me to gain an experience that is valuable to them while they’re here?” Linaksita said.

At first, Linaksita would aim to provide tailored advice for the students he mentored, expending more research before he provided answers to ensure students received the best advice. But he realized, over time, that most students appreciated getting pointed to the right direction instead.

“You would think that if you researched and gave them the most well-thought out answer, that, that is the best way to mentor someone,” he said. “But I found that, once they have done all their research, they might come up with a different solution … if you give them your approach to find the answer, you can find the answer together.”

“That’s just as important as raising a professional who is competent and happy in the profession,” he said. “They should become what they want to become, and not be affected by the mentor’s thoughts or preconceived notions.”

As for those who are just stepping into the role of becoming mentors themselves, Linaksita has this piece of advice.

“Trust yourself. You are in this role because you are capable of doing it. It is a big responsibility. Take it seriously.”