Denice Bucsit is pharmacy manager at Save-On-Foods Pharmacy on Prairie Ave. in Port Coquitlam. When the B.C. Ministry of Health announced AstraZeneca vaccines would be made available in pharmacies starting Apr. 1, 2021, more than 600 people quickly signed up to waitlists for COVID-19 vaccines at Bucsit's pharmacy. 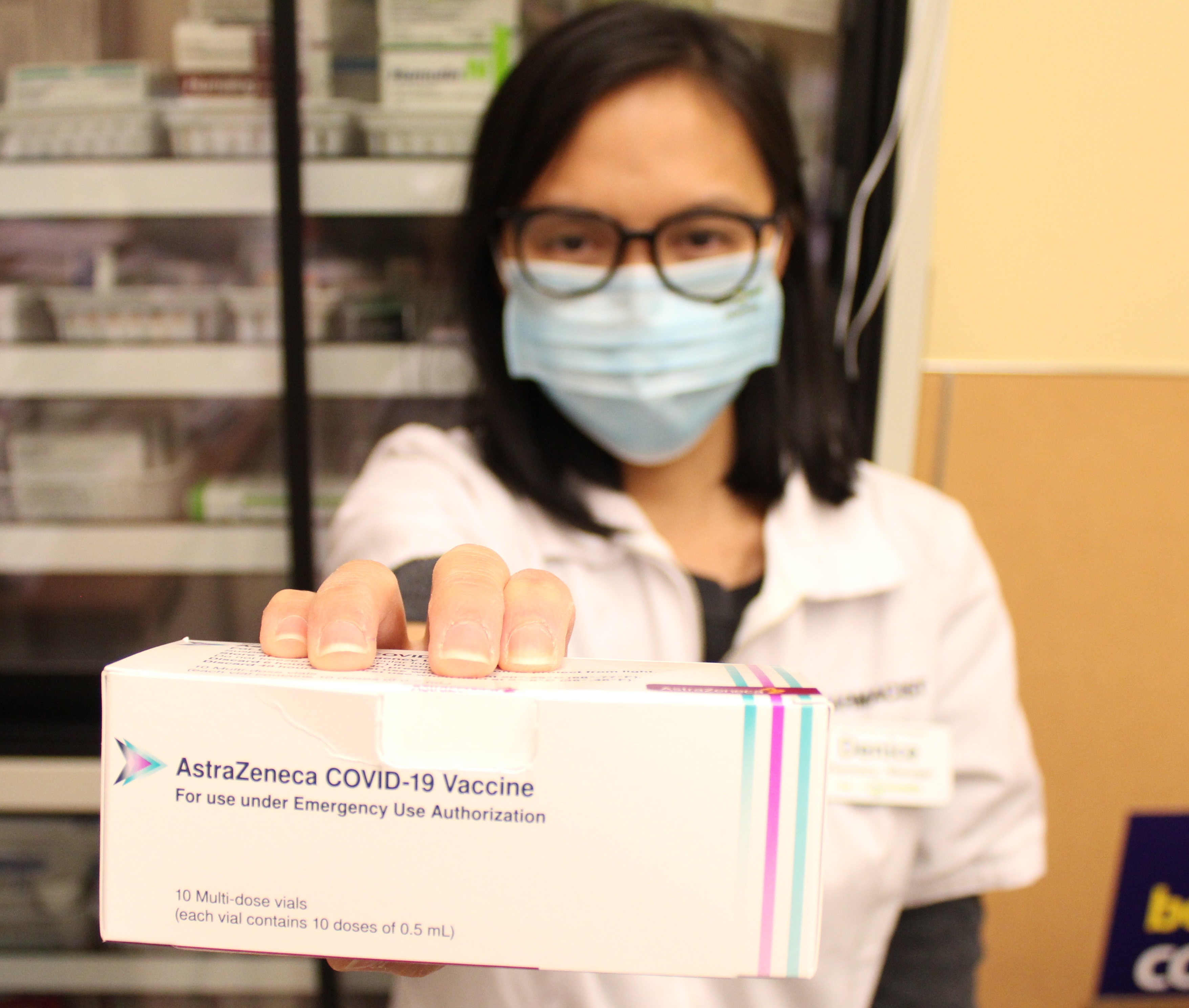 1) Your pharmacy started offering appointments on Apr. 1, 2021. What sort of demand did you see from the public?

When the government announced it would distribute AstraZeneca vaccines through pharmacies on March 31, we were inundated with phone calls. We started taking people’s names, phone numbers, and had a waitlist set up so people can put their names down. The online waitlist reached about 600 names for this pharmacy alone – on top of the phone calls we were receiving.

The vaccines arrived at our pharmacy around 3 p.m. on April 1. Right away, we called people from our waitlist and we were able to administer about 50 vaccines before the end of that day. The next day, we all came in early and did about 100 doses from opening to closing. The third day, we reached 150 people – the line up at one point stretched from our dispensary counter to the end of the store’s produce section!

People who received the vaccine were so happy. Some people came from as far away as North Vancouver and Mission. People took pictures, they were smiling, many couldn’t believe they were finally getting the vaccine.

2) Did patients have many questions or concerns about the vaccine? How did your team address those?

As a company, Save-On-Foods’ top priority is the health and safety of its team members, customers and communities. I always start by having a dialogue with the patient and asking them if they have any concerns. Communicating with the patient is the most important aspect.

We were ready. We did our reading, we attended many educational webinars, and we made sure we were up to date on the continuing education for our vaccines. So as soon as we had questions about the vaccine, we were able to provide answers with confidence.

For example, there was a patient today. He was already in the chair waiting for his vaccine and I was about to administer the injection. He seemed hesitant, so I asked him about his concerns.

He told me he had watched the news and had questions about side effects. I was able to explain the facts and how, especially for his age group, the benefits far outweigh the risks.

Another patient said she has seen many social media posts sharing negative information about the vaccine. We spoke with her, walked her through her concerns and offered to follow up with her a few days after vaccination to check on how she’s doing.

As pharmacists, it’s up to us to separate facts from fiction, to explain the reality of the situation and to offer our professional opinion and advice. When you answer your patients’ questions and address their concerns, it builds trust between our patients and our pharmacy team, and results in patients who are much more accepting of the vaccine. 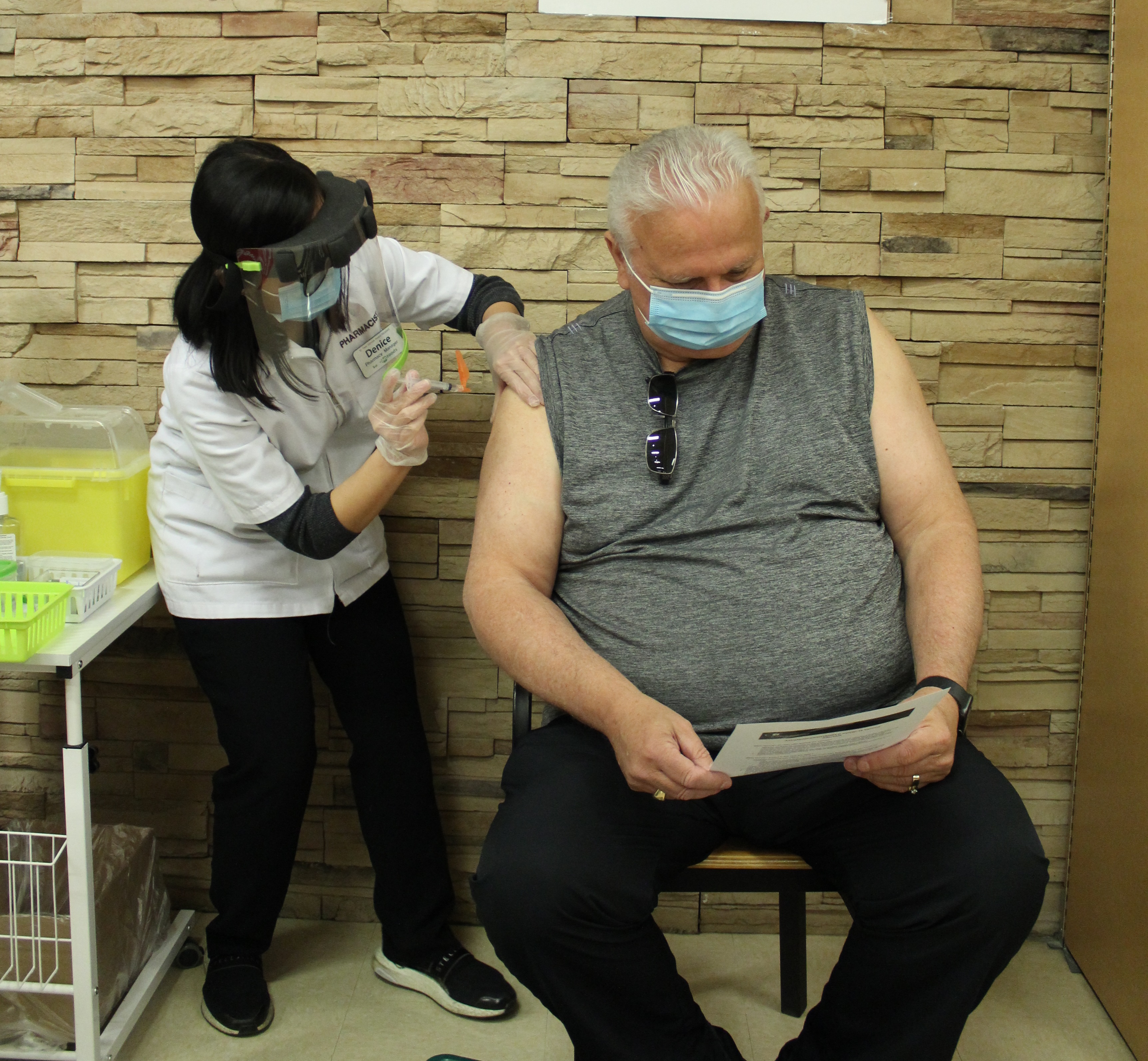 3. Why is it important to offer these vaccines through pharmacies?

It’s the accessibility we offer at pharmacies. Today, I had a 79-year-old patient asking to get the vaccine. Unfortunately, our priority group was still 55 to 65 so we were unable to offer her a vaccine at the time.

The patient told me she didn’t have any way to get to a public health clinic, but she visits our pharmacy every day. We are accessible, she trusts us, and she wanted to get the vaccine here. And I think people really do want to get the vaccine. They want the protection – the infection numbers are rising and they want to make sure they’re protected.

People also have confidence in our pharmacists’ skills. We have been providing vaccines by injection since 2009, during the H1N1 pandemic, and people trust our skills and knowledge.

4. How can a patient go about booking a vaccine?

It’s as easy as that.

The BC Pharmacy Association has a continually updated list of pharmacies in British Columbia who are currently offering COVID-19 vaccinations. Please check back regularly as more locations are added.