Two COVID-19 vaccines have now been approved in Canada and it is expected pharmacists will play a broad role in their administration for patients across British Columbia.

On Dec. 9, Canada approved the Pfizer-BioNTech COVID-19 mRNA vaccine, followed quickly by the approval of the Moderna mRNA vaccine on Dec. 23. Batches of both vaccines have already arrived in B.C. and are being administered in a phased approach.

According to the B.C. Ministry of Health, the first phase will go through February and targets up to 150,000 people, with focus on those living in assisted living or long-term care facilities, hospital workers and First Nations communities.

The second phase will begin in from February to March, when the provincial government plans to vaccinate up to 400,000 people, with priority groups in this phase being seniors living in the community, the homeless population, and 20,000 community- and hospital-based health workers across the province. It is during this second phase that community pharma-cists are expected to become more involved in the administration of vaccines.

From April to September, the provincial government expects to vaccinate the rest of the general population, with the elderly to be prioritized by order of age.

In total, the Ministry of Health expects to receive up to 792,000 doses by the end of March; about two-thirds will be the Pfizer-BioNTech vaccine, while the remainder will come from Moderna. Supply disruptions, however, are already beginning to adjust these numbers.

Throughout 2020, federal officials reviewed and approved the vaccines quickly, enabled in part by federal orders issued in May and September 2020. According to Health Canada, the orders permitted drug companies to reduce administrative requirements and have a direct line to those who review COVID-19 clinical trial applications.

Dr. Megan Bettle, director general of the COVID-19 regulatory response team at Health Canada,
said normally, it would take “several years” for a company to develop a vaccine. Before the COVID-19 pandemic, vaccine developers had to first complete studies on both animals and humans, collect the data, and submit the information in a single submission.

With the urgency created by the pandemic, vaccine developers were instead permitted to submit their data in a “rolling” process, where information was reviewed by Health Canada in real time.

“So, for example, the animal studies—the preclinical data—might be available earlier, and that could be provided and reviewed first. Whereas data from later clinical studies would be provided later… at some point we would have enough information to make an authorization decision,” Bettle said.

Even following the decision to authorize, vaccine developers would be required to continue to submit ongoing data as it becomes available, she said.

“For a normal product, we would take six to 10 months to review it, but that’s kind of more workload management. From the Health Canada review part, we’ve greatly accelerated that simply by throwing a lot of people and a lot of time at it, as well as introducing these new review processes so we can get the data as soon as possible, as opposed to waiting for the studies to be done.” 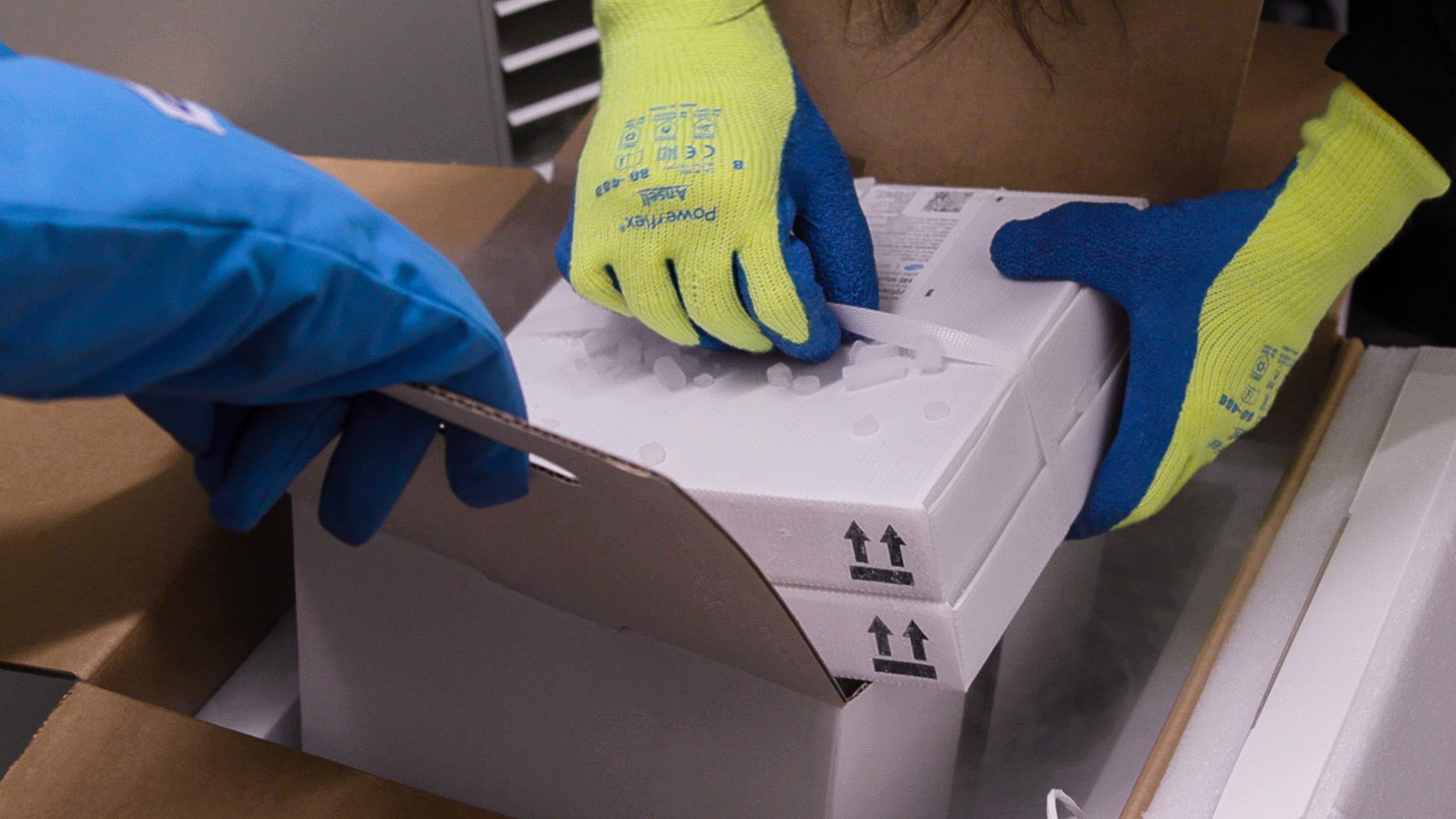 In total, Canada has made agreements in principle with seven vaccine developers, focusing on vaccines that use three types of technologies. Dr. April Killikelly, the vaccine technology lead for COVID-19 at the Public Health Agency of Cana-da, said vaccine developers in particular focused on immune responses that target the coronavirus’s surface “spike protein.”

“The hypothesis is that when SARS-CoV-2 virus makes contact with the host cell via ACE-2, anti-spike antibodies or other cellular immune responses could disrupt this interac-tion between the virus and the host cell,” Killikelly said.

Both the currently approved vaccines in Canada work by providing our cells instruction to create the coronavirus “spike protein,” so our immune systems can recognize COVID-19 as a threat and trigger a response. While other vaccines are being developed, the Pfizer-BioNTech and Moderna vaccines are novel in that, unlike traditional vaccines, their delivery mechanism is achieved through the use of messenger RNA (mRNA).

An enormous advantage of mRNA vaccines is speed of production, said Dr. Marina Salvadori, clinical lead for COVID-19 at the Public Health Agency of Canada.

"This is a really interesting technology. It's been in the works for a few years, but this would be the first widespread vaccine that will be used using this technology," Salvadori said in a recent presentation for Canadian vaccine providers.

"It floats around until it finds a ribosome. The ribosome then translates the messenger RNA into a protein, and the protein gets displayed on the surface of your cell. This then will elicit antibodies and T-cells."

Protein subunit vaccines work by delivering protein directly into the body to directly elicit an immune response, instead of using mRNA to instruct our cells to create the protein. Vaccines using virus-like particles do not have any nuclear materials or genetic material at all. Instead, the vaccine is a modified spike protein made to “look just like the virus.”

However, the manufacturing timelines for both these tradi-tional methods are slow.

“That’s why there are, as yet, none available,” Salvadori said.

While the Pfizer and Moderna mRNA vaccines are quick to produce, their clinical trials have shown promising efficacy data of approximately 95% each in their sampled patient populations. Neither of the vaccines have been recommended for children or those who are pregnant.

Though they were approved quickly, both vaccines also experienced supply disruptions, which has impacted B.C.’s vaccination plans.

This supply impact is in part why the provincial government has determined to extend the recommended period between the first and second dose from 21-28 days to 35 days, then again extended to 42 days.

“We are working with what we have available to best address those most at risk and those hotspots and outbreaks that are happening in communities around the province,” said B.C. Public Health Officer Dr. Bonnie Henry on Jan. 29.

“We will be getting back on track. It will be slow and slower than we wanted, but we are confident that we will be able to meet our phase one and phase two objectives as quickly as we can.”

By late-January, more than 87,000 people had already received a COVID-19 vaccine—among them included all eligible long-term care facility residents. Some of those shots were administered by community pharmacists, with many being invited by long-term care centres or health authorities on an individual basis.

Things moved fast. Pharmasave White Rock pharmacy manager Jason Chan was notified by an assisted-living facility his pharmacy traditionally works closely with that Fraser Health was arranging vaccines for the facility’s residents. He was given a week’s notice that a clinic was happening soon and was among four vaccine providers who showed up for the clinic. Among the vaccine providers were two physicians, two registered nurses, and Chan.

“There were 19 vials between the four of us. That was enough for about 95 patients,” Chan said.

To him, it was clear the health authorities needed help—his pharmacy even had to provide additional alcohol swabs and hand sanitizer due to lack of supplies at the clinic.

“At the end of the day, we ran out pretty quickly. For most people, I don’t think it hurt at all. The dose is small if you com-pare it to a flu vaccine and most of them were pretty anxious or excited to get it,” Chan said.

Each vaccine provider first drew 1.8 mL of diluent, which comes with the Pfizer vaccine, injected the diluent into the vaccine vial, before drawing out the same amount of air to equalize the pressure within the vial. Each vial was good for five to six doses.

“I felt super confident,” Chan said. “Us pharmacists, we’ve done hundreds of thousands of vaccines these past few months. We just went through the busiest flu season ever—we could do so many more if we were utilizing more pharmacists in the community.”

Diana Trejus, a pharmacist with Medical Pharmacy who services long-term care facilities, had a similar experience in early January when she was called upon to help. Instead of administering the vaccines, she was asked to review the eligibility of more than 200 patients. In her case, she and a nurse reconstituted and pre-drew vaccines to be ready for other nurses who administered the vaccines to patients.

Alex Dar Santos, a former president of the BC Pharmacy Association, was also called upon. He and six other pharma-cists attended the Vancouver General Hospital, where they vaccinated hospital staff who were deemed at highest risk.

“The administration did all the pre-screening and consent, so the job of the pharmacists was to strictly administer and provide a bit of information on what to expect and deal with during post-vaccination care,” Dar Santos said.

“The time-consuming part, quite frankly, was the mixing of the Pfizer product. I would say I spent about 50 per cent of my time preparing the vaccine, rather than administering.” In total, Dar Santos administered vaccines for about 90 people.

As there were doses leftover from his two clinic shifts, Dar Santos also received a vaccination himself.

“There were extra doses left at the end of the day and because of that, there was an offer put out that vaccinators who were providing the service can arrange to vaccinate one another, if there was any left over,” Dar Santos said, noting the importance that no vaccines go to waste.

“I think [in B.C.] we’re probably one of the only jurisdictions where pharmacists are already starting to participate in these clinics. The reason why I wanted to do this was, it just got the ball rolling, to put our faces as pharmacists out there as contributors to put an end to this thing.”

Follow
BC Pharmacy Assoc.
@bc_pharmacy
Our 2021 Pharmacy Excellence Awards nominations has opened! Throughout the past year, BC's pharmacists have kept their doors open, serving patients and providing accessible health care in a time of great need. Consider nominating a deserving pharmacist! https://www.bcpharmacy.ca/conference/awards
Reply Retweet Favorite March 3
BC Pharmacy Assoc.
@bc_pharmacy
Statement to media: B.C.'s pharmacists are ready for the next steps of the provincial COVID-19 vaccine plan: https://www.bcpharmacy.ca/news/bc-pharmacists-ready-next-steps-covid-19-vaccine-plans #Phase2 #COVID19 #Vaccines
Reply Retweet Favorite March 1
BC Pharmacy Assoc.
@bc_pharmacy
March is Pharmacy Appreciation Month! Pharmacists have been serving their communities tirelessly, ensuring the public can access health care during a global pandemic. Your pharmacist deserves your appreciation. Take the time to give thanks to your pharmacy team this month.
Reply Retweet Favorite March 1