Microdosing of Buprenorphine for Induction (the Bernese Method)

Bob is a 42-year-old patient who was started on methadone a year ago for the treatment of opioid use disorder. He is currently receiving a methadone dose of 120mg daily. Today, he presents to your pharmacy with a new prescription for “buprenorphine/naloxone 2mg/0.5mg tablets” (See Figure 1 for more details) as well as a continuing prescription for methadone at the same dose. It is the first time that you have seen this combination together. How would you assess these prescriptions? What type of information do you need?

Introduction
In 2017, the BC Centre on Substance Use (BCCSU) and Ministry of Health released new guidelines that recognize buprenorphine/naloxone as a first-line treatment for opioid use disorder. This decision is largely based in response to the nation-wide opioid crisis. Last year, 1,451 illicit drug overdose deaths were reported in the province according to the BC Coroners Service. This epidemic continues into 2018, with 742 overdose deaths reported between January and June. It is evident that new strategies are needed to fight this ongoing public health emergency. 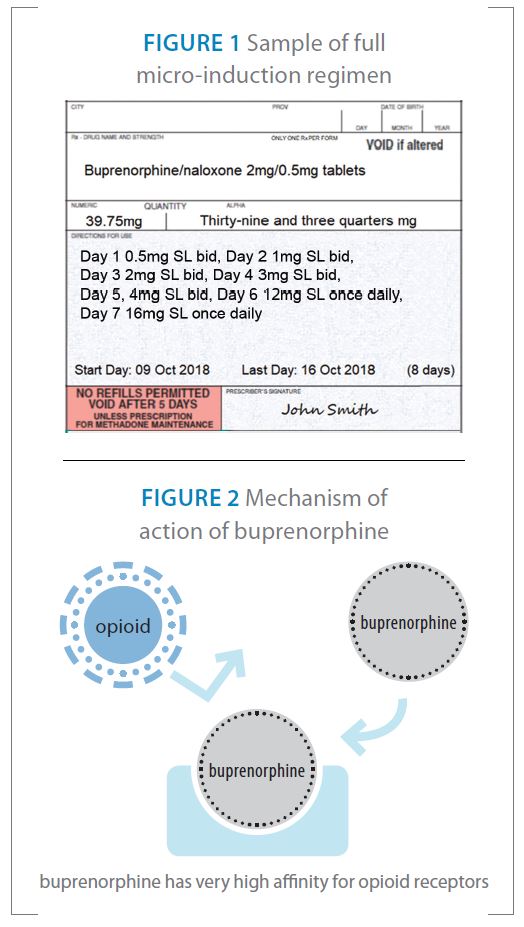 In this article, we present a novel approach to opioid agonist treatment by Hämmig et al. using microdoses of buprenorphine with concomitant full opioid agonist use, also known as the Bernese method.

Background
Buprenorphine is a partial mu opioid agonist and weak kappa opioid antagonist used to treat opioid use disorder. In Canada, buprenorphine is available as a fixed combination tablet with naloxone in a 4:1 ratio. Naloxone has poor bioavailability upon sublingual administration, and it serves to prevent diversion and misuse. Once administered, buprenorphine exerts partial agonist activity on the mu opioid receptor with high affinity and stays for a long time (Figure 2). Affinity of an opioid to the mu receptor is quantified by Ki values, as shown in Table 1 (page 20). Of note, buprenorphine exhibits a higher affinity relative to other opioids such as morphine and methadone. Because of its partial antagonist effect and low intrinsic activity when used in opioid-dependent individuals, buprenorphine will displace the full agonists from receptor sites without activating the receptor to a comparable degree. This can cause a phenomenon known as precipitated withdrawal, which is a rapid and intense onset of withdrawal symptoms (i.e. drug craving, anxiety, restlessness, gastrointestinal distress, diaphoresis and tachycardia). To avoid this, an individual must be in a state of mild withdrawal before starting buprenorphine. The need to be in withdrawal before induction and the risk of experiencing precipitated withdrawal after induction may pose a barrier to starting buprenorphine treatment and/or increase the risk of relapse during treatment.

The BCCSU recommends buprenorphine as first-line therapy over methadone for most patients in the absence of contraindications as it has minimal effect on QTc prolongation, fewer drug interactions, less potential for abuse and overdose.

The Bernese Method
A 2016 case study published out of Switzerland by Hämmig et al. introduced two cases of successful buprenorphine induction overlapping with full opioid agonist use. The authors’ hypotheses for the study were that small, repetitive dosing of buprenorphine with sufficient dosing intervals (i.e. 12-24 hours) should not precipitate withdrawal, and buprenorphine will begin to accumulate at the receptor due to its high receptor affinity and long binding time, and as a result, an increasing amount of full agonists will be gradually replaced by buprenorphine.

The study introduced a case of a 30-year-old female using street heroin who failed the traditional induction method multiple times and another case of a 49-year-old male who was enrolled in a heroin-assisted treatment (HAT) program for six years, receiving full opioid agonist therapy with diacetylmorphine (DAM) IV and methadone daily. The study lacked a consistent protocol for dosing of buprenorphine, but both cases were started with 0.2mg of buprenorphine and titrated upward slowly while tapering off the overlapping administration of full agonists (street heroin or prescription agonists). Microdosing regimen for Case 1 is presented in Table 2. The titration was more complex and slower in Case 2 as the patient was well-stabilized on known high doses of full agonists and at high risk of precipitated withdrawal.

Clinical Implications
Current buprenorphine/naloxone induction guidelines require an individual to be in moderate withdrawal (clinical opioid withdrawal scale greater than 13) before initiating buprenorphine/naloxone, which can take 12 to 24 hours for short-acting opioids and 48 to 72 hours for long-acting opioids. For those switching from methadone, ideally the dose is tapered to 30mg or less then stopped for at least 36 hours before induction. Even though this method is simple, it is associated with increased risk of destabilization due to prolonged tapering of methadone.

Prescribers may find the Bernese method more convenient than the classic induction method, since treatment can be initiated immediately without waiting for the patient to be in withdrawal first. Given these two case studies, there may be a role for microdosing in the treatment of opioid use disorder especially in patients who have previously had difficulty starting or continuing buprenorphine. Further randomized, systematic studies are required to determine whether the Bernese method is associated with better tolerability and treatment outcome compared to conventional induction methods, and to establish an optimal dose titration scheme.

Practical Pearls
You may begin to see patients coming to your pharmacy with a prescription for microdosing of buprenorphine/naloxone as more prescribers trial this method. Here are our recommendations when you receive these prescriptions:

Disclaimer: The information and views set out in this article are those of the authors and do not necessarily reflect the official opinion of the Lower Mainland Pharmacy Services or BC Centre on Substance Use.

Sandy Lu is a registered pharmacist working at a primary health care clinic located in Vancouver with Lower Mainland Pharmacy Services (LMPS), and an MPH candidate at the London School of Hygiene and Tropical Medicine.