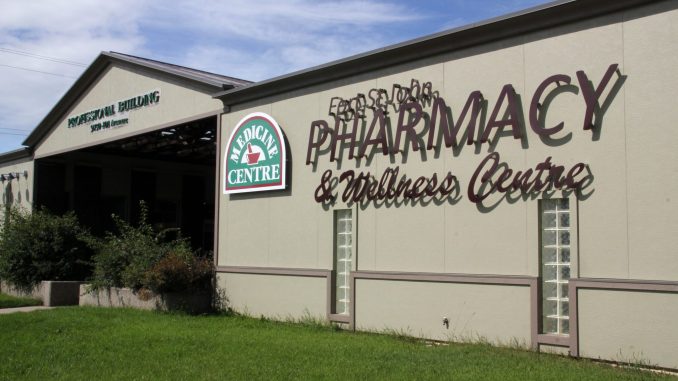 The project is called ‘Genomics for Precision Drug Therapy in the Community Pharmacy’ and is the first of its kind in North America and a pharmacy in Fort St. John is among participants in the study.

The project has completed the first stage and is now moving into the second stage. The project is co-funded by Genome BC and the BC Pharmacy Association (BCPhA), with research led by a team at the University of British Columbia’s Sequencing and Bioinformatics Consortium (SBC).

Dr. Corey Nislow is the lead researcher on the project as well as the Director at UBC’s SB.

“We’ve been able to sequence DNA for 30 years and until 10 years ago it was really done on a team by team basis and in 2001 the first genome was sequenced and the cost of that one human genome was $3 billion and it took almost 10 years.”

He explains that since that occurrence took place, the costs have dropped. Now you can sequence a genome for $2,000 and it takes around two to three days to sequence.

“The implications are pretty profound. We all have six billion letters in our DNA, that is our genome. Every human being on the plant is about 99.8% identical so of all the six billion letters, very few of those letters differ between any two people but it is that 0.2%, which is a few million, that makes people individual and to take it one step further, those variations in our genome in addition to making things interesting, they also dictate to a large part how we respond to our environment.”

Nislow says that there are at least 150 genetic variations that dictate how people respond to drugs.

“The fact that we can sequence genomes quickly and rapidly, it is a lot of sifting as you can imagine, going through six billion letters to find 150 but we’ll take it because those 150 variations can have profound differences in how you or I respond to the exact same dose of the exact same drug.”

The first phase of the project focused on whether pharmacists could be the conduit to providing PGx testing. That phase determined pharmacists could successfully fill that role. 29 community pharmacists in locations across British Columbia from greater Vancouver to small communities such as Chetwynd and recruited 200 patients.

Phase 2, which has begun, is primarily focussing on Mental Health drugs.

Nislow also says that during phase 1, they decided to stop short of delivering back DNA information to the patients.

Phase 2 is essentially identical to phase 1 says Nislow but the key difference will be that information will be returned back to participants this time around. They are focusing on three types of medicines but mainly on mental health. The other two types are pain and cardiovascular.

Nislow says that because DNA never changes, you would be able to continue to use that data for all future drug interactions at a pharmacy.

“I get excited because I think of a 5-year-old going into a pharmacy in 10, 15 years and this will be routine and they won’t think twice of the empowerment they get from knowing their DNA.”

Fort St. John Pharmacy and Wellness Centre pharmacist-owner Michael Ortynsky explained that the pharmacy regularly participates in studies such as these.

“It was just an outreach from the BC Pharmacy Association and they said if you’re interested in this kind of thing, sign up and put your name in and we always do.”

He says that the response from the public was surprisingly interesting and that residents are usually keen on these types of things.

“We didn’t have any really negative ones but we did have some who were like ‘what is that?’ and the original study had to do with Warfarin.”

Ortynsky says that they had very strict ethics guidelines that were outlined by UBC such as not being able to go through their database and find patients that were on Warfarin.

“You couldn’t be any staff member. It had to be the person authorized to be part of the study group and then you could ask them ‘Hey Mrs Smith, I noticed that you’ve got a new order for Warfarin here and you’ve been on it for some time, would you be interested in this kind of thing?’. They had to be engaged.”

“Phase 1 was just to prove that you could confidently collect the DNA information and that the genome could be sequenced, that it could be done safely, informed consent could be obtained and that DNA could be gathered and secured in a way that it couldn’t be hacked.’

Ortynsky says it would be great if you could gather DNA from one person and screen and predict if a certain drug will work for them and to determine if a drug will be a risk to a patient.

“You can significantly reduce the chance of failure on the drug and waste. All of this points to a day where you will be able to go into a pharmacy and say ‘I’ve got the following three drugs. Are these the best for me? Are these safe? Are they going to harm me? If they do pose a risk, what is the safest dose for me to take?’ that kind of thing and to me, that is kind of cool.”