In the face of a public health crisis, B.C.’s community pharmacists are exploring new ways to help curb the rising tide of overdose deaths. Last year was the worst year yet, with more than 1,400 British Columbians who died from suspected illicit drug overdoses.

For years, B.C. pharmacists have been on the frontline of managing treatment for patients with opioid addiction with methadone maintenance and other opioid agonist treatments (OAT) like Suboxone and Kadian.

From discussions on daily witnessing fees for Suboxone and Kadian to pushing for free take-home naloxone kits in pharmacy, the Association has been bringing the voice of pharmacy to government and health-care stakeholders. As the idea of both injectable and tablet-form hydromorphone therapy treatment gains traction, the BCPhA has advocated that pharmacists must play a key role in helping deliver these services to patients. 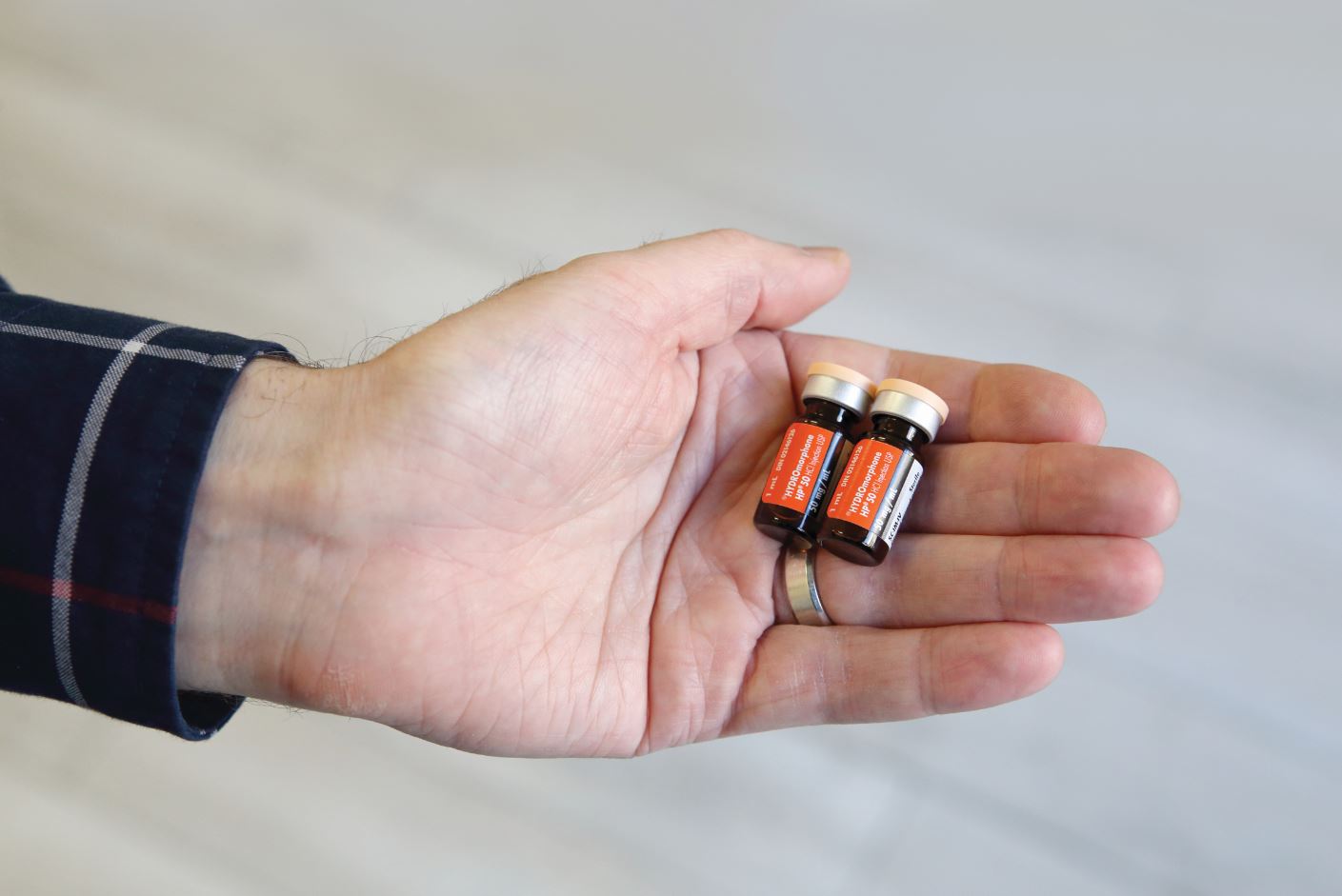 Injectable hydromorphone is dispensed to qualifying patients at Pier Health Resource Centre, a pharmacy in Vancouver's DTES, as part of a program with Portland Hotel Society and Vancouver Native Health.

At Owl Drugs on the corner of Main and East Hastings, Ken Leung and his team of pharmacists greet their patients with a smile, a place to sit and a warm cup of coffee.

Most of Owl Drugs’ patients are on opioid agonist therapy, with about 50 to 70 patients at any given time, taking methadone, Suboxone or Kadian to help manage their opioid addictions. But the pharmacy doesn’t focus solely on their addiction. Pharmacists offer patients flu immunizations, offer to find antibiotics that are covered by a patient’s PharmaCare plan or follow up on a case of the sniffles.

“We’re very proud of our engagement with patients,” says Pharmacist Rami Hanania. “I tell them, ‘Let me know how you’re feeling,’ That’s the advantage of a pharmacist. We see patients on a daily basis.”

Patients leave the pharmacy with a take-home naloxone kit and training on how to use it. Any patient who needs it gets a sharps kit – 10 clean needles, gloves and an empty disposal bin for used needles.

Pal Jarjabka, who started with oxycodone tablets and Percocet to manage a workplace injury, eventually turned to heroin. Now he visits Hanania and the pharmacy team daily for methadone treatment to help manage his addiction.

Living in the Downtown Eastside, Jarjabka has revived at least 10 people who have overdosed on street drugs laced with fentanyl or carfentanyl. Others weren’t as lucky.

“It’s awful,” he says, adding that dispensing prescription hydromorphone for those that need it could be one way to prevent more deaths and a start to getting them the resources they need. “These are depressed people that need mental health care.” 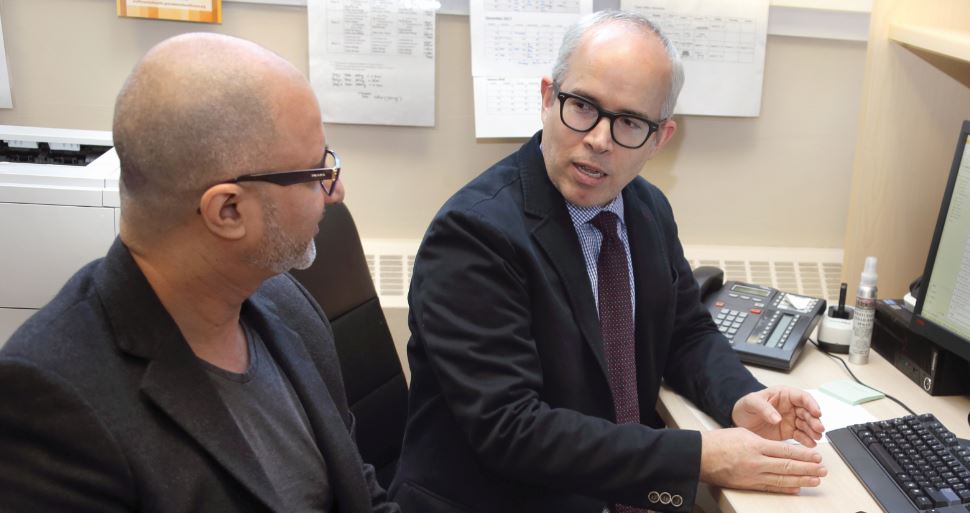 Parker Rothgordt visits Providence Crosstown Clinic three times a day, seven days a week where he injects himself with diacetylmorphine, the active ingredient of heroin, under a nurse’s supervision.

Rothgordt injured his back as a shake-block cutter in the 1990s. Originally from Port McNeill, he tried to manage his pain through prescription medication, but began buying heroin on the street.

In 2013, he applied to be part of Crosstown’s SALOME study, in which about 200 patients who were unsuccessful with other OAT therapies like oral methadone were able to receive injectable diacetylmorphine, the active ingredient of heroin, and hydromorphone under

the care of clinic staff. It is the only clinic in North America that offers prescription heroin as a form of treatment.

“It’s kept me alive. If I had been using on the street, chances are I would be dead,” Rothgordt says.

The use of opioids, over time, can change a person’s physiology requiring them to take external opioids to maintain function and prevent withdrawal symptoms. This is a medical condition referred to as addiction and needs to be treated as such using all options available. This includes allowing patients, along with their clinicians to determine their own dosing levels, says Crosstown Clinic’s Pharmacy Director Amin Janmohamed.

Janmohamed was part of the NAOMI Study conducted in 2005, a co-investigator in the SALOME Study and now, with Bixa Therapeutics, works with Crosstown Clinic.

Of the current Crosstown patients, 20 per cent that started on injectable treatments have moved to oral treatment and out of the clinic program. Some patients are also receiving other oral therapy as they transition through their treatment.

“Injectable treatment is not our end goal,” says Crosstown’s lead physician Dr. Scott MacDonald. "In this population, they are suffering, they are at risk of death."

He sees community pharmacies, which are set up across the province, playing a key role in helping transition patients back to their communities where they have support structures, not just staying on injectable hydromorphone in Vancouver’s Downtown Eastside.

“If there’s anything we have learned from the opioid overdose crisis it’s that there is a significant number of people who are undertreated and underdiagnosed,” MacDonald says. “Pharmacies could be part of that solution.”

Since March of 2017, Vancouver’s Pier Health Resource Centre has worked with the Portland Hotel Society and Vancouver Native Health to dispense prescription hydromorphone to patients and allow them to administer it to themselves in the pharmacy.

Two times a day, patients enter a room where a pharmacist assesses them before dispensing a clean syringe with the proper dose of the prescription hydromorphone, which the patients inject under the eye of a pharmacist.

The pharmacist then watches the patients for 15 minutes, making sure patients are reasonably stable before they can leave.

“Safety is always the No. 1 thing,” says Pharmacist Craig Plain. “These are patients who doctors have selected. They’ve failed other treatments. We have a waitlist for the program right now.” 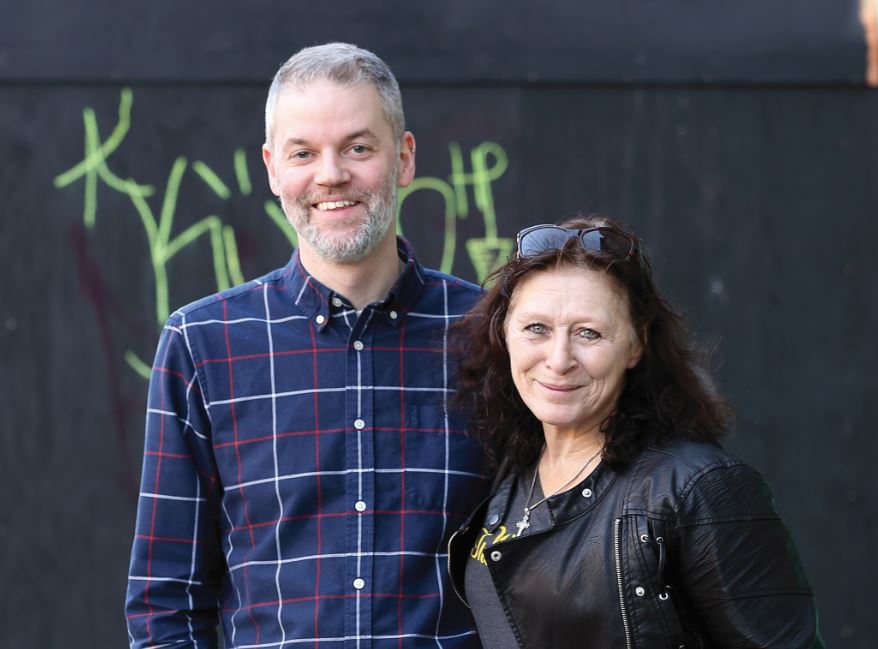 Pharmacist Craig Plain at Pier Health Resource Centre, which dispenses hydromorphone to patients and allows them to administer it to themselves in the pharmacy. "Safety is always the No. 1 thing."

The Association has been advocating to the College and Ministry of Health for increased training for pharmacists who deliver opioid agonist therapy (OAT).

“There is a community pharmacy in almost every community in B.C., in some places where there aren’t even doctors,” says Geraldine Vance, CEO of the BCPhA. “Pharmacists are the most accessible health-care providers and know their patients by name, see them in the morning and know if there’s anything wrong.”

Conversations continue to advance in how the province can get prescription hydromorphone into the hands of patients who need it to curtail deaths from tainted street drugs. And pharmacists will continue to be there for their patients.

“At the core of addicts is the feeling of guilt and shame,” Owl Drugs’ Hanania says. “But when they are reminded this is a chronic condition, it’s O.K. to relapse and we are here to help and support you, we can beat this.”

Since 2016, the BC Pharmacy Association advocated that community pharmacy be a distribution point for free take-home naloxone kits. Through discussions with the BC Centre for Disease Control, nearly 450 B.C. pharmacies are providing free kits to eligible British Columbians.